The Importance of Cognitive Closure

The term ‘closure’ is often-used in popular culture - certainly in popular psychology - in reference to a sense of completion. But its meaning and usage seem to have become increasingly less tangible, and its origins vague. What can delving into the main theoretical texts - such as Webster and Kruglanski’s seminal ‘cognitive closure’ papers - tell us about our own behaviours and the effects those can have on our decision making?

How can we define cognitive closure?

Webster & Kruglanski (1994 & 1996) explain cognitive closure as a theoretical framework to explain why people avoid uncertainty and seek answers. In states of uncertainty, we begin to rush to find certainty, searching through information less thoroughly. Heightened cognitive closure evokes impatience and impulsivity which makes individuals leap to conclusions without sufficient evidence. In 1994, Kruglanski & Webster created the Need for Closure Scale. The scale operationalises cognitive closure in a forty-two-item scale which includes five underlying motivational factors for the need for answers. This Need for Closure Scale scale shows how high or low a need for closure is at any given point.

Why do we need it?

Uncertainty is an extremely unpleasant state that individuals want to remove quickly and prevent from recurring. However, individuals vary in their desire to remove it. Some people are more needy for answers, predictability, and stability. Others are more comfortable with ambiguity and indecision. This can make it difficult for the latter type of person to empathise with the former’s level of stress induced by the task, leading to potential friction in a team situation. Most common in people is a tolerance that falls between these two categories; comfort with a certain amount of uncertainty but with a need to maintain a level of predictability.

Can that have a negative impact? 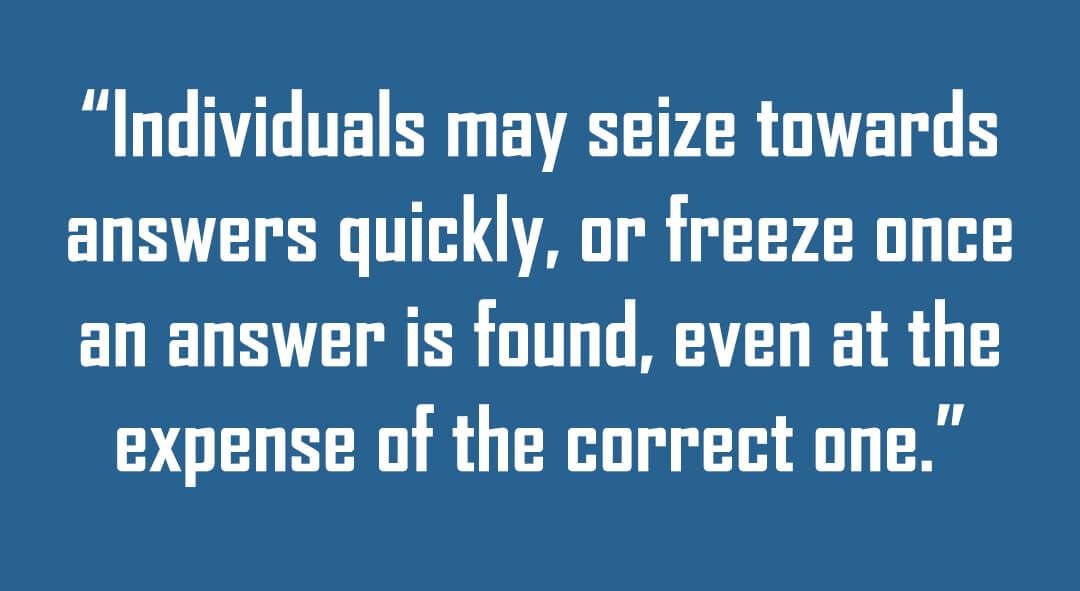 What behaviour can it trigger?

Individuals may seize towards answers quickly, or freeze once an answer is found, even at the expense of the correct one. Driven by a need to gain information quickly, one often then tries to preserve the certainty of an answer as long as possibly by ‘freezing’ and safeguarding our knowledge. For example, in debates, we may support examples that validate our initial view rather than changing our view. Once we are frozen, our confidence increases as our stress decreases. Hence our resistance to accept that the right answer is still out there. The state of uncertainty, or ‘in-betweenness’ is just too stressful of a state to handle. However, if we are not forced to seize a new answer, then we solidify in our frozen state, become increasingly more confident and run the danger of building our beliefs and arguments on unsubstantiated grounds; grounds that stemmed from the removal of an unpleasant and stressful state rather than from knowledge.

The need for cognitive closure could explain why it is so difficult to admit that we are wrong, and why false rumors start and remain. Once the information is out there, it becomes frozen, and who wants to appear as if their judgement is flawed by admitting their fault? Certainly among the onslaught of deadlines, fatigue, and information overload which is enough to drive anyone to look no further than their current answer. Individuals with a higher preference for closure may prefer authoritative leadership styles with clear cut decision making, labour division, and roles. Higher cognitive closure is also relevant to stereotyping. It can be beneficial in solving problems under stress, becoming more disciplined, and practicing patience. It can also help with productivity, forcing you to move forward with decisions and get things done.

How can I understand it better?

The more salient our actions are, like when we solve complex problems in groups, the more we think them through before seizing an answer. Our cognitive closure is affected because of a fear of invalidation and judgement from others. Thus, we are forced to find the holes in our logic. Putting ourselves, then, in uncomfortable uncertain situations can force decision making processes and generate increased confidence in our decisions overall. Understanding our own need for cognitive closure can benefit us when faced with uncertain situations. Ultimately, this helps us practice better decision making, specifically during time pressured scenarios and deadlines. Practicing in a safe and risk free environment such as an escape room where you are under time pressure and with a common goal amongst your teammates can help you understand and cope with uncertainty and be more confident in your decision making.