Our Intrepid Reporter: the PCE experts 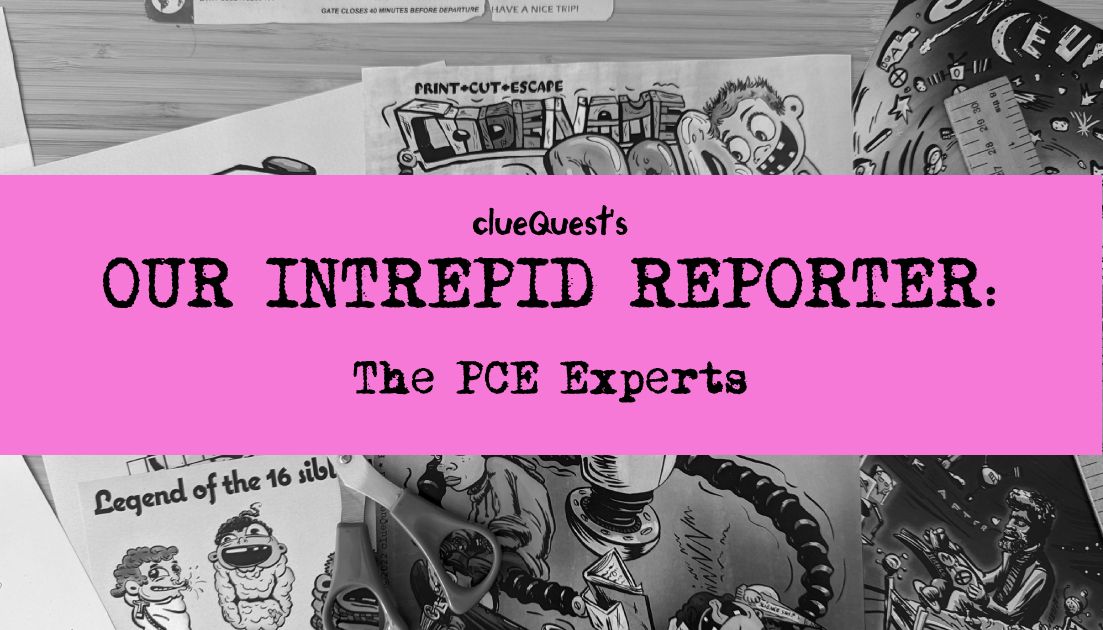 In 2020, clueQuest brought to life an innovative new look at the universe of Mr Q - the Print+Cut+Escape! Now, two years later, Our Intrepid Reporter sits down with two of the brains behind the magic to find out how it all happens, and most importantly, to learn about the newest addition to the clueQuest universe.

Our Intrepid Reporter: Who are you, and what is your role at clueQuest?

Gigi: I’m Gigi, and I’m one of the four brothers who own clueQuest, plus being its graphic designer. I make the PCE games, create the drawings, come up with the puzzles, as well as a lot of other things.

Andy: My name’s Andy! I used to be a games maker at clueQuest, but when I moved to Scotland during the pandemic I moved over to the PCE side of things. I basically do all the things that Gigi doesn't! I help with developing ideas and story concepts at the beginning, but I also do all the in-game writing, build the games in our back end system, do the sound editing, some of the voice acting, help with project management, and organise the testing!

Gigi: And checking through all my mistakes!

Andy: There's also two other people who help us a LOT - our IT support wizard Jóco, and our 3D designer Robi.

OIR: So, for readers who might not know… what is a Print+Cut+Escape?

Gigi: The idea was born during the pandemic. You print, cut out and play the puzzles, and you also enter the answers in an online system. There’s a story to each one, with lots of videos to watch!

OIR: What’s the first thing you have to do when you create a PCE?

Andy: Normally the first thing that happens is Gigi comes to me and says, ‘I have an idea for ‘X’, and we go from there! Gigi usually has formulated half a dozen puzzles in his head already - he’s definitely the creative powerhouse of the team. So we start with a chaotic jumbo of creative building blocks, and we pass them back and forth to try to knock it into a shape. It might mean adding things in or taking things out until everything makes sense!

Then we move into different phases. The first one is mostly Gigi doing a lot of drawing and aa lot of puzzle designing. Then it starts to come more over to my side; I play the puzzles, give some feedback. Then I start writing mission briefs, writing clues, coming up with stories - just trying to link everything together! Eventually we’ve got puzzles we can give to other people in order to get more feedback and refine even more. And the last phase is the final rush when we try to get everything ready for launch!

OIR: Who do you usually get to test your puzzles?

Andy: It’s generally internal. But sometimes I get some people outside of clueQuest to give them a go, and that’s really good because ideally you want people to play the games who aren’t puzzle people, because you want it to be as accessible as possible. PCEs should be fun for everyone.

Andy: Specifically, all the games are in the same world. Everything fits into this narrative one way or another, and that’s really cool, and I think it's pretty unique for escape games. If you come to clueQuest and play cQ Origenes, and then you play the PCE Prison of Memories, they’re directly linked. Recent PCEs have nods to previous ones - there are little references that you can spot if you’re looking for them!

Gigi: Our designs as well - they’re all hand-drawn, unique drawings, which is why they can take so long to make!

Andy: Yes, they’re full of art. We’ve got a very distinct style! And the cutting out, too, that’s fun - we often get corporate groups telling us it reminded them of primary school; it’s a nice little homely element.

OIR: Which is your favourite PCE?

Andy: Operation E.G.G! It's a really good game, and on a personal level I put a lot into that one. Particularly puns - so many egg jokes!

Gigi: I can’t really say, they’re all so different. It’s like asking you to pick your favourite child.

OIR: If you had to describe Codename Dad in three words, what words would you use?

You can find out about clueQuest’s collection of PCE games available to play here, and purchase the newest PCE, Codename Dad here.