Lewin's Three Management Styles | Identifying Which is Best for Your Business

For better or worse, everyone’s management style is different... Which can make it extremely hard to assess your own. You may find common ground in the styles of your peers or idols, but without set labels, how will you develop a consistency to your methods; an ethos that feels complete? Luckily, the work of social psychologist Kurt Lewin boils it down to just three styles, complete with each one’s observed effects on a team.

Who is Lewin, and what are his styles?

Kurt Lewin became interested in social psychology in 1909 at the age of 19, while studying biology in Freiburg, Germany, having moved from his birthplace of Mogilno in what is now modern-day Poland. Later, in 1933, he relocated to America, where, in 1947, he made what is potentially his most widely utilised contribution to the world of social psychology by coining the phrase ‘group dynamics’. Nowadays, the word is so common in modern parlance that it seems absurd to think that it was not in use until so recently; a consequence perhaps of MIT renaming the faction of the university which Lewin directed the ‘Centre for Group Dynamics’ at the prestigious university.

Those in the field hold his theories in extremely high regard. For example, he came up with a framework for checking the possible forces influencing a situation, and his foundational research for ‘sensitivity training’ was called the greatest social invention of the century. But those will be covered at a later date. For now, we’re focusing on how Lewin categorized the management styles and consequent workplace environments that he witnessed time and again into three main atmospheres: autocratic, democratic and laissez-faire.

The behaviour styles can largely be deduced from their titles, so do excuse any potential feelings of condescension that are caused by this explanation. We promise we’ll make it quick:

Autocratic: An autocrat displays tight control over their group and the activities therein. Decisions come from above and are unquestioningly carried out.

Democratic: Democratic rule - arguably an oxymoron - relies on a series of group decisions. While a leader often lends structure to the proceedings, their role is less to instruct and more to guide their team. The environment is one where an idea can be overruled by a better one, so long as it is backed by a majority vote.

Laissez-faire: Minimal involvement from the leader, resulting in something of a free-for-all. The leadership equivalent of a shoulder-shrug. 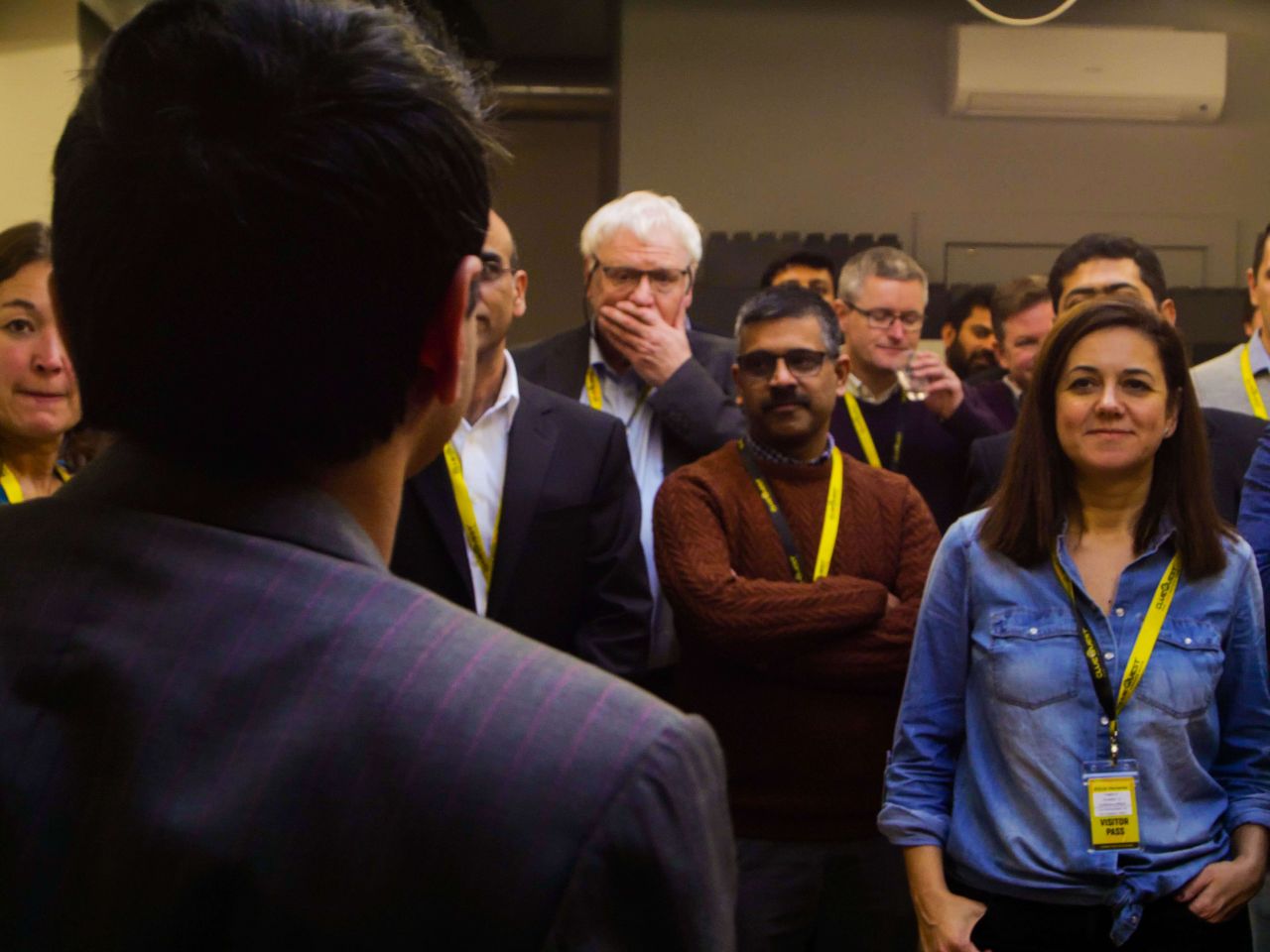 So which one is best?

If only things were that easy. The question isn’t quite so straightforward due to the fact that every team is different; made up of different individuals in wildly varying contexts for which certain styles simply work better than others. A team of surgeons, for example, are in need of a clear, authoritative voice so that nothing slips through the cracks (both literally and figuratively). They’re under very limited time constraints, and the last thing they need is a vote - besides, just imagine a room full of bloodied white gloves being raised in a ‘yay or nay’ fashion.

By the same token, the writers’ room for an animated sitcom needs to be a relaxed environment where creativity can flow and bad ideas can be thrown out without fear of being judged. As a quick Google search for behind-the-scenes Simpsons footage will attest to, this is best cultivated under a relaxed, laissez-faire leadership.

However, these are fairly unique examples. They stretch the definition of what makes a traditional office, and perhaps it’s for this reason that these extremes work. The reality of most office-based environments, however, is that they benefit from a little bit more nuance… Which is why Kurt Lewin’s conclusion was that in the majority of contexts, a democratic approach is the one to aim for.

As Bernard M. Bass - considered by some as a natural successor to Lewin - summarises in his 1990 text, the democratic leader is social and participative. They share power, delegate and lean towards the egalitarian and affiliative. The result? Adaptability. The middle-ground between overbearing and uninvolved allows for constant re-evaluations of each individual’s strengths and weaknesses, and consequently for a redistribution of labour for each task on a case by case basis. By contrast, an autocrat is at risk of stifling their workforce, causing them to fear the consequences of leaving their post, and a hands-off leader may find themselves faced with the following problem: How does one restructure a unit with no initial structure? 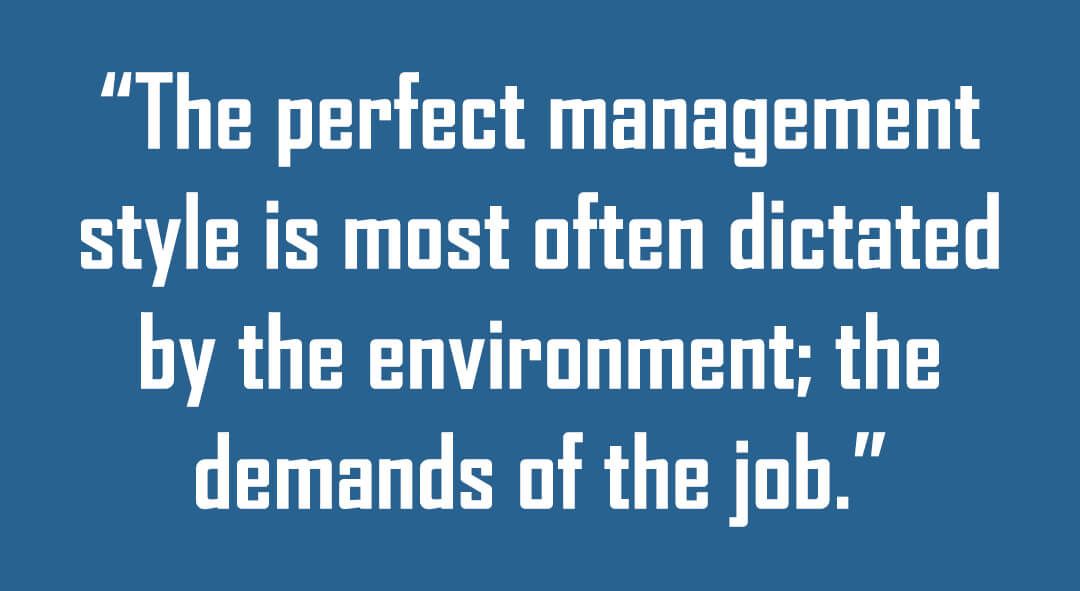 How can you find the right style, and work towards it?

Let’s just quickly review, then, what we’ve established: The perfect management style is most often dictated by the environment; the demands of the job. However, more often than not, these demands are fluid; the environment everchanging. Perhaps that sounds like a load of poetic nonsense but rest assured it’s far from it. While the vast majority of people in employment may not feel like their landscape is in constant shift, think back to any team project that differed to your (and your team’s) everyday duties and all its usual trappings: an all-too-fast-approaching deadline, an off-sick employee, an unforeseen printer issue. It’s almost inevitable that someone will have had to throw off their usual hat and throw on another, and a democratic environment is best for this sort of thing.

But maybe that simply doesn’t sit right with you, and to that, we say: Listen to your gut. If you’re in need of a way of really nailing down the right method for you, we can help with that. The clueQuest Assessment Programme is specifically tailored to assess the performance of your team and pinpoint the areas in which they excel, and those which are holding them back. We utilise the ORCE method (Observe, Record, Classify, Evaluate) to provide feedback about your team’s behaviour when faced with the challenges found inside one of our escape rooms.

Think back to what we described above about taking on a new work project. The time constraints, the unexpected obstacles, the need to pull together - Familiar themes to anyone who has ever taken on one of our - or anyone's - escape rooms. It’s their microcosmic nature that makes them so insightful for anyone looking to take an eye-in-the-sky look at their workforce’s interactions. The case may be, for example, that their most effective moments were under the instruction of one clear voice, in which case it’s safe to conclude that a heavy leaning towards the autocratic method may well be best. To find out more about the clueQuest Assessment Programme, click here.

Let’s say, though, that you do know what’s right for your team. You recognise the benefits of the democratic environment but don’t recognise it in your current style. Step two is to figure out how to transition from the old style to the new as seamlessly as possible.  Well, it turns out that Lewin has just the advice for that too. He breaks it down into three simple steps: unfreeze-change-refreeze. Staff resistance, he says, is inevitable but can be managed by reducing the group’s attachment to the current system by challenging what they perceive as their joint interests.

This too is where the clueQuest Assessment Programme can help. We’ve seen it function as a metaphorical shoulder-shake for teams whose existing habits and gripes are inevitably tied to their everyday environment. clueQuest escape rooms give them a chance to - potentially for the first time ever - succeed together on foreign ground. Nothing beats taking on Professor Blacksheep, to make you feel like you can do anything…

The information included in this blog post derives from the following places: