On 26th March 2020 the UK went into its first Covid-related national lockdown, and we here at clueQuest locked the doors of our Kings Cross venue with a heavy cloud of uncertainty hanging over our heads. When would we open them again? Even more terrifying a question - would we ever open again?

Because the reality was that we were entirely dependent on customers coming to our site and playing our games. Now this has never really been a problem - we are very fortunate to have a wonderful venue in a great location in a thriving and tourist-attracting city! But all of a sudden none of that mattered. Instead what we found ourselves with was a big empty building with rent, bills and wages to pay, and no way to make any money… The situation did not look great!

But as they say - necessity is the mother of invention…

Only 18 days after lockdown began we were incredibly proud to release our first ever play-at-home game “Stolen IQ”. We won’t go into all the details of how it came to be - you can read all about that in this other blog - but needless to say it was a monumental team effort. And as that other blog aptly puts it - it absolutely saved our as**s!

One year later - we’re still here, and we’re still making Print+Cut+Escape games! As of now we have released 8 in total - including our very own original trilogy, 4 standalone stories, and one game that will eventually be the first of a two-part series.

All the games hold true to the original concept of Print+Cut+Escape - in that they combine paper components with an online interface, and they all feature the fantastic artwork of our Artistic Director (and P+C+E innovator) Gigi. But around that fundamental core we’ve tried our best to innovate, develop and vary things as much as possible.

The most obvious changes can be seen in our online system. It was pretty basic at first - simple text and answer boxes, and a few embedded videos to add some narrative spice. But with every new release we’ve tried to add something new, both in terms of technical development and user experience. Now we have cutting guides, preparation pages and extra online artwork. Audio and video puzzles have been joined by interactive visual interfaces and virtual 3D models. And most recently we’ve been experimenting with ways for players to customise the actual content of the game, and to affect the progress of the story with the decisions they make! 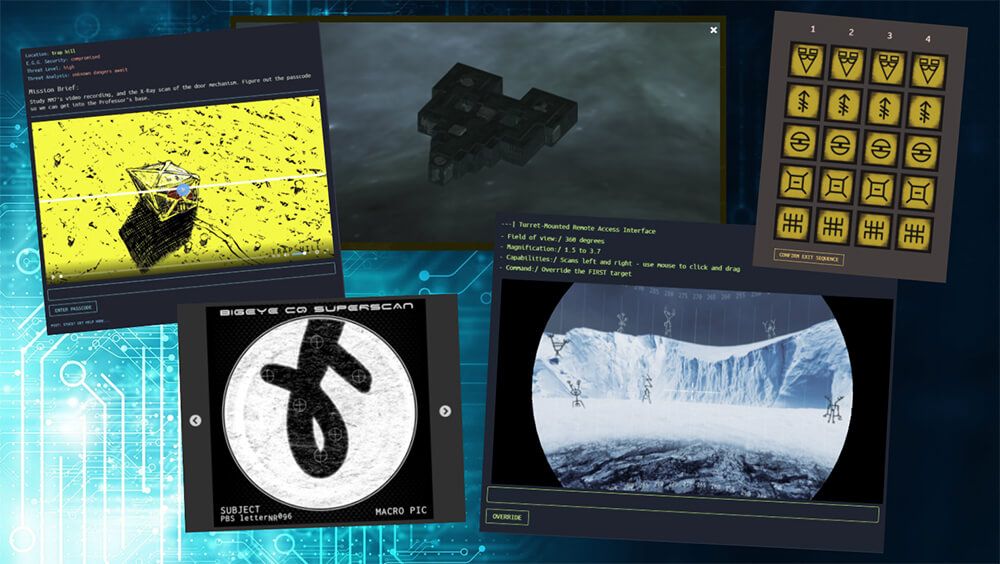 Talking of players, one thing we realised as lockdown continued was that we really missed them! Playing puzzle games at home is all well and good, but sometimes you get stuck - and even the best pre-written clues are no replacement for a real Games Maker to help you out. So we began to look for ways to get our GMs back into their saddles. We quickly realised that we can host P+C+E over webcam in much the same way we do for physical missions, bringing in the personal touch with an introduction, explanation, and timely assistance as when required. We began by offering hosted games of “Humanity 2.0” to our corporate customers for office socials and Christmas parties, but now we’ve expanded it out to anyone who wants to play either “Humanity 2.0” or “timeQuest” with a host.

Finally, there is one more very important feature of Print+Cut+Escape, without which none of the other features would matter at all. And that is all of our agents who have supported us by buying and playing these games over the last year. We cannot stress enough just how grateful we are to everyone who has played a Print+Cut+Escape game, told their friends about them, given us their feedback on what worked and where we could improve. It’s a journey of constant development and it’s only with your help that we are able to keep making it!

The next big step for clueQuest is the reopening of our Kings Cross venue. There’ll be a lot of changes to make and challenges to overcome as we get used to running escape room missions again in this strange new world, so that’s definitely going to be our focus for a while. But that doesn’t mean that Print+Cut+Escape is going away. “Prison of Memories Part 2” is still coming but you might have to wait a few months for it. Beyond that we may hold off for a while until Christmas, so we can come up with something new and exciting to unleash upon you all!

Until then agents...keeping on playing safe!

Mr Q and the clueQuest team.